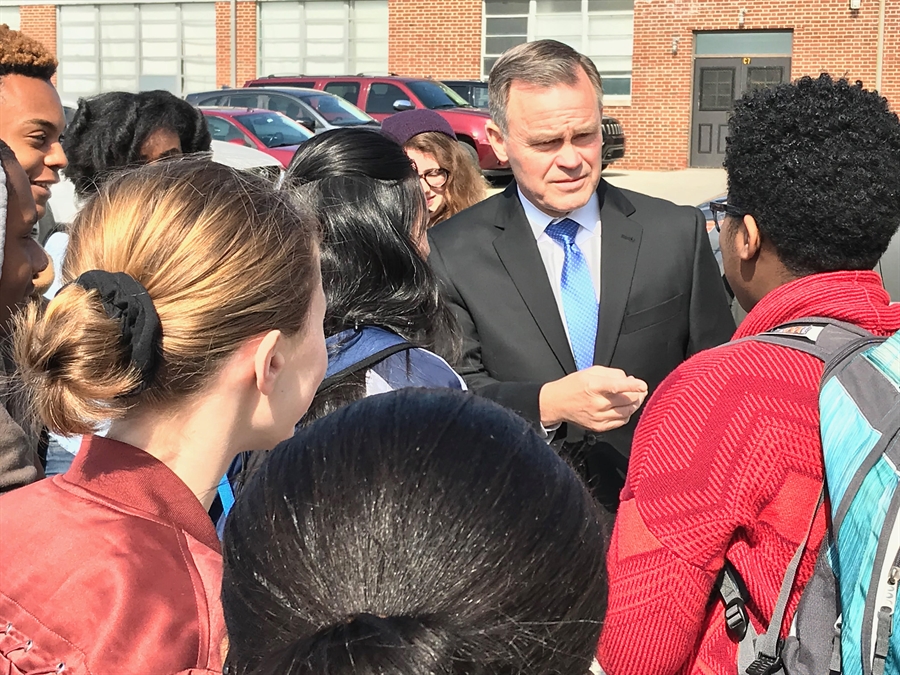 The World Affairs Council of Harrisburg awarded the QCSD Superintendent with its Global Enlightenment Award for 2020.

Quakertown Community School District Superintendent Dr. Bill Harner is a recipient of the Torch of Global Enlightenment Award for 2020, awarded by the World Affairs Council of Harrisburg.

The announcement was made by Joyce M. Davis, president and chief executive officer of the organization which honors individuals and organizations in the region that have contributed to a better understanding of world events and appreciation of diverse languages, cultures and lands. Honorees represent the highest ideals of global engagement and enlightenment, Ms. Davis said.

“Dr. Harner is unique among many educators in that he has a truly global perspective,” Ms. Davis said. “He knows he’s preparing our next generation of world leaders and understands the importance of equipping our young students with ways to deal with not only people in our community and our country but in the world. Dr. Harner is a globally enlightened leader, and our board is well aware of his many accomplishments.”

She said Dr. Harner exemplifies the ideals of inclusiveness, respect for diversity, multiculturalism and interfaith dialogue.

“This was totally unexpected and I am so appreciative,” Dr. Harner said. "It is an honor to receive this recognition from this outstanding organization that does such important work for students. I have received incredible support from our community and School Board for the district’s diversity initiatives and global learning. Without their encouragement none of these things would be possible.”

Under seven years of Dr. Harner’s leadership, QCSD has taken steps to address racism in the Upper Bucks community. Two years ago, the district held its first Martin Luther King Jr. Day of Service. QCSD underwent a system-wide diversity and inclusion initiative with the Pearl S. Buck Foundation, which assessed 400 employees as part of "The Welcome Workplace" program. PSB professional trainers and staff worked with district leadership and stakeholders to build individual and group intercultural competency.

For the past two years, all fourth graders in QCSD have completed a Peace Center program designed to develop tolerance and empathy among students while building a more inclusive classroom community. Last October at its annual auction gala, The Peace Center honored QCSD for implementing the diversity and inclusion program at a district-wide level. It’s the only Bucks County district to do so.

In addition, he fervently supported the efforts of students and graduates to peacefully protest in Quakertown following the death of George Floyd. In an effort to facilitate ongoing dialogue and understanding, last winter the high school premiered “Walking While Black,” a dialogue between Bucks County law enforcement officials and the African American community.

“Dr. Harner brings speakers from throughout the world to engage and educate students,” Ms. Davis said. “He encourages young people to attend our activities. He goes out and pushes global engagement to your region. If he sees something important he reaches out and grabs it and brings it right to his kids. I personally have great admiration for him. His vision is one of a world-class leader. Dr. Harner is really dear to the hearts of our council, to the hearts of young people.”

“Dr. Harner asked me to take students out there,” Ms. Frisch said. “Our students learned so much from going. They had an opportunity to hear different perspectives and share their own.”

It’s similar to what Dr. Harner has done with the district’s Model United Nations program, a simulation of the UN General Assembly and its other multilateral bodies where students perform an ambassador role while debating a variety of topics.

“He wants to prepare our students to become more worldly acclimated as we become a more global country,” Ms. Frisch said. “Under his leadership, our students have become exposed to ideas and thoughts they might not hear sitting in a classroom in Quakertown. It gives them confidence they can move outside of our community and interact with students from around the state, from around the world.”

Ms. Frisch’s description illustrates a pillar of Dr. Harner’s college and career readiness programs for students, which developed during a 20-year military career following his graduation from the U.S. Military Academy at West Point. During his military career, Dr. Harner served in Europe, Asia, and throughout the U.S. Prior to retiring as a Lieutenant Colonel in 1998, he had a tour of duty on the staff and faculty at West Point. For two years, Dr. Harner was the liaison between the Office of the US Secretary of Defense and the Office of the Republic of Korea’s Minister of National Defense, in Seoul, South Korea.

“Having experienced different societies around the world, I know we must help prepare our students for what they will need as they go out into the world,” he said. “Programs offered by the World Affairs Council are perfect for those enriching experiences.”

Gary Weckselblatt, QCSD Director of Communications, writes about the people and the programs that impact the Quakertown Community School District.