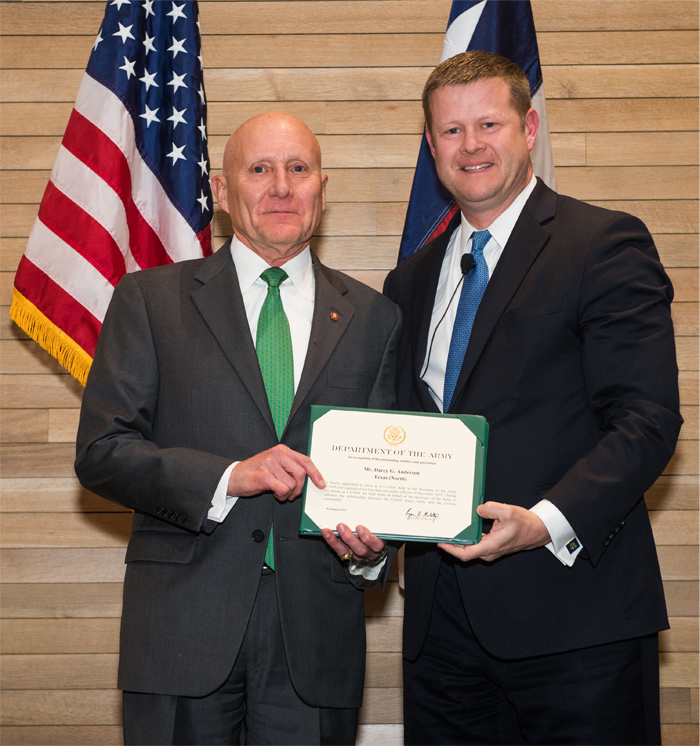 DALLAS -- The U.S. Army appointed five Texas residents as new Civilian Aides to the Secretary of the Army (CASA) during an investiture ceremony in the Perot Building here Jan. 8.

"I want to thank Darcy, Joe, Tim, Gus, and Abdul for their willingness to serve," McCarthy said. "Our Army is an all-volunteer force. Now, more than ever, we rely on our volunteers, such as CASAs, to help build networks, foster relationships and tell the Army story to your communities. You are the first handshake into the city and the last handshake as I head back to D.C. The Army is open for business and we're looking for the best of the best. I am counting on our CASAs to lead the way."

CASAs are a vital part of the Army, promoting good relations between the Army and the public and advising the Secretary about regional issues.

Each state, the District of Columbia and the five U.S. territories have CASAs appointed to provide a vital link between the Army and the communities for which they serve. CASAs are usually business or civic leaders who possess a keen interest in the welfare of the Army and their communities.

"Civilian Aides to the Secretary of the Army are an integral part of sharing the U.S. Army story," Anderson said. "I am proud to be appointed as it will allow me to continue serving my country and assist both the secretary and key Army leaders. I look forward to using my network and platform as a business and community leader to build bridges of understanding between the U.S. Army and the public."

Anderson served in the Army five years in various capacities with Corps of Engineers combat units. He has served as a board member for both West Point Association of Graduates and West Point Society of North Texas and as a member of Congressmen Marc Veasey and Van Taylor's service academy selection boards.

Anderson is currently Hillwood Management vice chairman, a real estate, oil and gas, and investments company. From November 2000 until April 2009, he served as Perot Systems chief people officer and as vice president of information technology services and consulting firm. Prior to joining Perot Systems, he held various positions at Hillwood Development Corporation beginning in 1987.

Note: Reprinted from The Official Home Page of the United States Army.