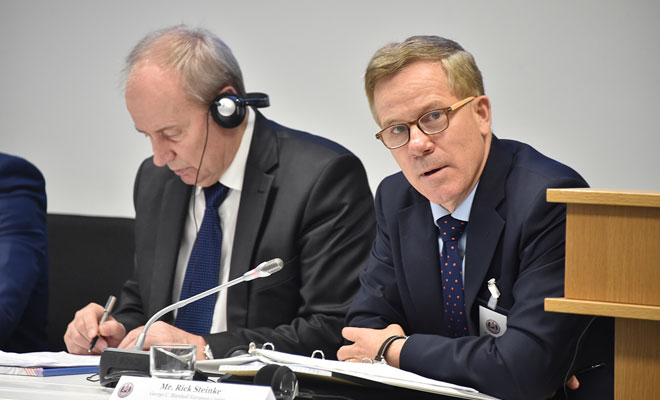 GARMISCH-PARTENKIRCHEN, Germany (July 24, 2017) – Fifteen senior leaders from the Ukrainian Ministry of Defense and General Staff, as well as two Ukrainian parliamentarians, traveled to the George C. Marshall European Center July 19-20, for a sixth seminar in a series of executive-level meetings to improve defense reform in that nation.

The primary purpose of this seminar was to increase communications and cooperation between the Ministry of Defense, General Staff and Parliament. The agenda included discussions on key reform challenges between the military and parliament and examining ways to propose and adopt solutions for improving cooperation.

Syroyid, a Marshall Center alumnus, has been an active participant in each of the six senior leader seminars. She said defense reforms are difficult because of a lack of trust between the military and parliament. Marshall Center seminars help provide a venue to build trust and find solutions.

Marshall Center Associate Dean Rick Steinke has been one of the key players in each of the Marshall Center senior leader seminars. He said this seminar built on the accomplishments made in the five previous seminars and helped the overall efforts in Ukrainian defense reforms with a new group of participants.

"This seminar not only provided a communications ice breaker for some key members of the Ukrainian government defense sector and parliament but it also produced some much-needed focus and measures on how to sustain effective communications in the future. We also touched on some new topics such as drafting National Security Law and Ukrainian soldier quality of life issues," said Steinke.